Seated on my desk glued on the screen of my computer. Am very busy i don’t notice my cup of black tea getting cold.
Kring!kring! Vibrations i can’t afford to ignore.
Grab my phone to check. It’s an Instagram notification from Moha, an inspirational individual I follow.
Its about #TBT-(#throwbackThursday). Oh I forgot what day of the week it is. This gets me to think of a throwback of a hero that deserves celebration.
Luckily I find one. Its Welles Remy Crowther. Not many of us would know who he is. Google has really help me here. What is important is he died at only 24 years. No he laid his life for others to live on his behalf
Wells is a hero of the 9/11 bomb attack at the World Trade Center.
After attack Welles made his way down to the 78th floor sky lobby, where he encountered a group of survivors, huddled and waiting for help, some badly burned while others dead.
Using a Red bandanna he had carried for 18years( given to him by his dad at 6) he help people from the 78th floor to the 61 where he met firefighters. He left the survivors with them and went back up to help others.
through putting out fire and first aid for those he could.
“Everyone who can stand, stand now. If you can help others, do so.”Welles said
He carried some and led them to the stairway.Welles turned around and went back inside multiple times.

9:59AM Tuesday 9th September 2001
South Tower collapsed
Welles dies from the collapse of the building. His body is  in the debris for 6mounths until it is retrieved on March 19, 2002. 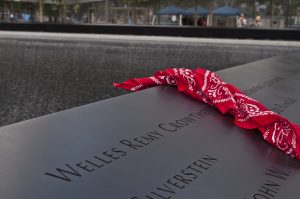 From survivors accounts, Welles saved as many as 12 people following the attacks.
Welles was not self-centered. He had an opportunity to save himself. But to him the joy of saving others was more overwhelming. He dedicated his life for others.
It was painful for Allison and Jefferson Crowther, until they knew how he died; from the accounts of the survivors.
And this is what they said :
His mother commented, “We took great peace in knowing that [Welles] didn’t suffer and that, up until the end, he was being very courageous, doing what he wanted to do. So he must have felt very fulfilled that day, knowing he was helping others.”
Jefferson Crowther (Father) said of his son, “He didn’t live long enough to be head of a corporation or do good works or endow a museum. But what he did on September 11, that’s his legacy”
We don’t need to be presidents or CEOs to change the world. It is doing what really matters that counts.

What is your RED BANDANNA?

How many Lives have you saved?
when you die, how many lives will you have saved?