Today’s reflections come from the Man Wahome, whom I boast and use the name. That man has a great love for flowers and plants, though not a farmer like my mother. Most visitors who have walked into his compound are always mesmerized. The compound is a sight to behold.

This is from the landscaping, the relics and artefacts around the compound. What you see is always a reflection of his love for the good-looking environment. This gentleman is not only an enthusiast of nature but also a fanatic of it. The word horticulturist would be an addition to the many titles he holds.

Every Monday, he takes time off from everything and landscapes his flowers. Being a senior citizen, he has embraced these activities to remain active and young.

There are over 30 different kinds of flowers and plants in our compound. Most of which have been bought, borrowed or collected in the many places he has travelled.  When he is done tendering to the flowers at home, he extends the service to the church he goes to.
This is one great lesson from my friend and brother, who happens to be my father. A fact that many people don’t agree with. Considering it a joke for me to brother and friendzone that great gentleman.

Almost forty years ago, he visited a friend who had a very beautiful climber which he admired. As he was leaving, he asked if he would pluck a stem for his yard. The friend was very gracious and offered a complete plant. My, George, as I call him, would plant it and it flourished, like the many things he puts his hands to.
Within a very short time, it had attached itself to the neighbouring trees and wall. Within a few years, the climber was everywhere a very beautiful site. It covered the wall so perfectly. I have perfectly blended into the Kei apple fence and made it impenetrable.  You could barely see through, let alone go through it.

The joy from the climber would last just long enough. Enough to let us see its true pictures. While it was a beautiful plant, if you cut a piece of it, and it fell anything other than a rock, it would begin to sprout. This meant that it grew unnecessarily. It grew everywhere even when not required.
He knew things were falling out when a thatched gazebo he had built decided it was tired. It caved in. The outside toilet (for those who lived in the village) followed, not too long after. The Kenya Power poles that had braved the weight, began to show signs of weakness. The entire Kei apple fence fell from the weight of the plant. 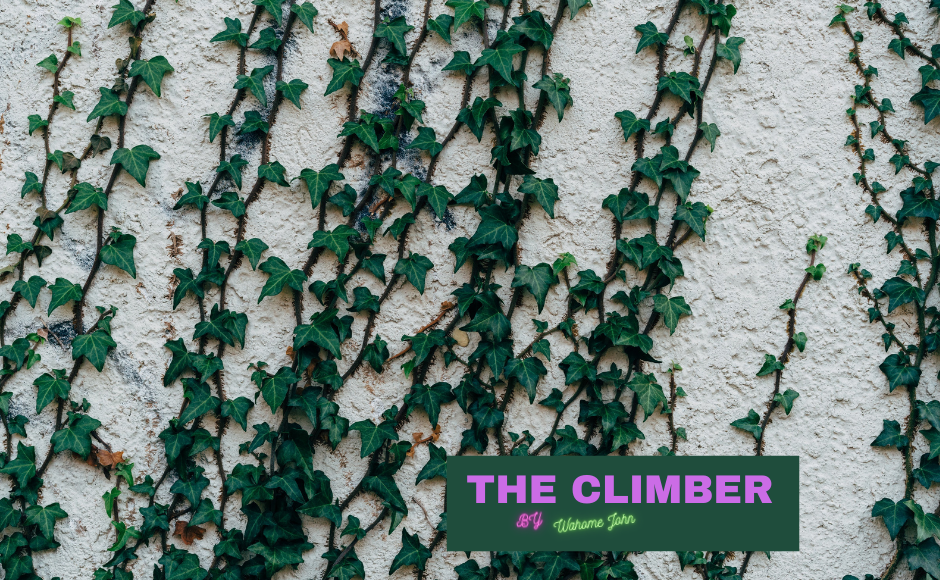 This is just another climber, not the one referenced here

It was time to take the beautiful climber out. It would begin a very gruesome several years. The plant was very resilient. You cut it down, but it was difficult to take out the tubers. Just a tuber, would grow back in a very short time and sprout into many other shoots. The entire fence crumbled but the climber survived. Some of the roofs had to be redone. Some areas had to be scotched, just to clear everything.

In the very end, the climber took more than the beauty it had brought in. The long-term pain was more than the beauty we celebrated. My George has since recovered from the impact and is more controlled with his plants. It is the reason he spends time with them every week. To ensure he will never be found off guard.

I have seen the plant in Nairobi in the last few weeks. If you look around the road, you’ll see trees that are drying up, with some climbers on them. Life has been sucked out of them. I have also seen the climber on roofs of buildings.

As I grew up, I picked enough lessons from his experience. Today there are many things that look and feel beautiful, and bring about great joy, but if uncontrolled are disastrous.  The joy of the moment should always be extrapolated and reviewed against the pains and costs in the long run. Words from George the Great

“Parenting requires the daily engagement of the parent with their children, only then can you identify changes that need action.”

These lessons and reflections on the climber should help us introspect and look beyond the surface.